This letter appeared in the Cynon Valley Leader in May 1992, in response to a vox pop in which people were asked ‘Is there too much sport on television?’
On Easter Monday my heart positively leapt when BBC2 announced ‘a slight delay’ to the snooker coverage. The reason? The televised tribute to the late Freddie Mercury had over-run its schedule. At last the truth was revealed.
Television coverage of sport takes precedence over everything except an international event with an estimated potential audience of 18.5 per cent of the world’s population.
At last I’d found something to displace the precious spectacle of two men in dazzling waistcoats, armed with wooden poles, conducting their postmodern joust over the field of cloth of green baize.
Next day, normal service had been resumed, and the coloured balls were everywhere. Had the strobing effect of the psychedelic waistcoats sent me on a trip? Had I dreamt the whole thing?
I don’t like sport. Let me be clear on this point. At school, an intensive course of aversion therapy cured me of all interest in physical exertion, except for the walk to the pub and the occasional attempt on the library stairs. I can summon a passing interest on most topics on conversation. Sometimes cricket does capture my attention – possibly for perverse reasons – but football, rugby, motor racing, horse-racing, golf, snooker, squash, boxing and even worm-charming leave me cold. (Women’s tennis is of course quite a different matter!)
In contrast I enjoy things like reading, walking, travelling, quizzes, crosswords and train spotting – a catholic mixture of pastimes shared by a fair cross-section of the population. I also enjoy watching television.
Two hours of Inspector Morse is enough to keep me out of the pub – an achievement in itself – and glued to the TV.
Imagine how I feel when the great detective is shoved aside to make way for football. One can almost picture John Thaw grumbling to Kevin Whately on that very subject. ‘What on earth is happening to this country, Lewis …?’ he might ask. As I do myself, frequently, when my favourite programme or looked-forward-to film vanishes from the schedules.
‘But it’s not really a problem,’ you say. ‘Just watch BBC1 instead.’ But in the spirit of true competition, the BBC has beaten me to it, and I find – football! What can I say? Usually, ‘Mine’s a pint, landlord.’
To make matters worse, two channels of sport isn’t enough. On a Sunday, three channels is quite common. In special cases we get four: pêl-droed or rygbi on S4C (in a simultaneous broadcast with BBC1, of course, but with a different commentary team); another football match on ITV, and golf or bowls on BBC2 if we’re really lucky.
There might even be sport on the radio, on a good day. For those fortunate enough to have a satellite dish, you can add angling or lacrosse or pro-celebrity dominoes to the list. Surely a menu to tempt the most jaded palate?
No I’m afraid not. As one of the sport-haters of this country, I would like a choice of viewing. Not a choice between one sport and another, but between sport and something else. Anything! Please!
And I don’t mean the sort of ‘choice’ where the number of channels you get increases in proportion to your disposable income, or comes served up by the local video shop. I mean real choice, provided the television companies who serve the whole population.
You can’t please all the people all the time, of course, but there’s no harm trying is there? Or failing that, how about live coverage of the freight movements through Gloucester station, early evening to early morning. Now, that’d be REALLY interesting … 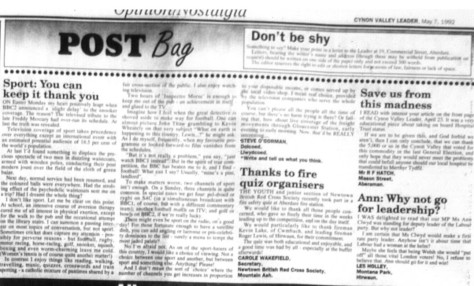