In which The Author needs some technical support

While I was rummaging through some old files on my hard drive last night, I found a university presentation which I put together about two years ago. It was for our Psychology in Everyday Life module, and dealt with the thorny topic of ‘product usability’. It was a thorny topic because I am a man, and therefore do not read the instructions for anything I buy. They’re for female users, after all. I would rather go up my own orifice for hours than ask someone for help. Have you ever met a man who stops a complete stranger to ask for directions? Stella, the mad Labrador pup from the White Lion, takes her life in her paws every time we set out on one of our overland treks. (See Stella’s Rambles for more details.)
When we do finally admit defeat, men and women even navigate in different ways. I’ve had a theory for several years that men use pubs as landmarks, whereas women use shops and hair salons as their reference points. I’d been gathering evidence for some time to support my case, until I was sitting in Waterstone’s staff room one wet lunchtime about four years ago. Mike and Tizzy were discussing music shops in Cardiff. There are two big ones on St Mary Street – one near the castle and the other near the bus station – and nobody ever seems to know which is which. Which was exactly happened that day in the staffroom:
‘Is that the one by Buzz & Co [a shoe shop]?’ Tizzy asked.
Mike replied, ‘No, it’s the one by the Brasserie.’
The shout of triumph as my theory was vindicated could probably be heard in both of them.
Anyway, when I finished in Waterstone’s I decided to treat myself to a new camera. I could have gone for a DSLR and spent months coming to terms with the controls, but instead I settled for an Olympus X-42 (see Picture This). I must admit that I like a compact camera. It can slip into my pocket and it’s ready to go in seconds. One of the features was the ability to take a series of shots in Panoramic Mode. Phil’s camera does this too, but he’s never had the patience or the IT knowledge to take advantage of it. (In fact, I was using the software long before he ever will, as I related in School Reunion).
So, on a sunny Saturday morning in Autumn 2009, the camera and I took a train ride to Cardiff. I was meeting Rowland for a couple of pints in the Vulcan mid-afternoon (which incidentally, ladies, is nowhere near any shops or hair salons!) and so had time to kill. I decided to head to the Bay in order to see if the dramatic conclusion of Pit Stop actually could be played out in reality. I was pleased to learn that, a few minor traffic violations (which wouldn’t matter in a police car) aside, it could.
From the Norwegian Church, the view across the cityscape is quite extraordinary. I decided that it was the ideal opportunity to potch about with the panoramic feature. I didn’t have my tripod, but I found a nice sturdy fence and used that as a basis for the shoot. I knew from using Phil’s software that I’d need to allow an overlap so that the computer could find the control points for stitching. I adjusting the light settings, took my position, set my camera to Panoramic Mode and fired from right to left, as follows:
Please bear in mind that I was just potching. The instruction manual was still in the drawer where I’d shoved it mere minutes after installing the batteries and the software.
The following morning, I uploaded all the photos to the PC, fiddled about with the Olympus Master 2 software for a few minutes, and stitched my very first panorama:
Some people in the valleys think one Welsh Assembly is more than enough. There are about four in this picture.
Anyway, in uni the following day I was having lunch with my pal Huw E. By now I’d installed Olympus Master 2 on the Netbook. Huw’s a keen photographer. I decided he’d appreciate the surrealism of this image, so I showed it to him.
‘If you flip the pictures and try again, it’ll probably work,’ he suggested. So I did. I opened up GIMP, and rotated each photo 180° about the vertical axis. Then I ran the software again and it worked a treat. To an extent …
If you know Cardiff at all, you’ll spot the un-deliberate mistake straight away. If you don’t – the whole thing’s flipped through 180°. The Pierhead Building and St David’s Hotel are on the wrong sides. (I’m not the first to make that elementary mistake, mind you. In the 1960s, a British newspaper printed a photo of the Beatles with Paul playing right-handed and George and John playing left-handed.)
One final flip of the composite image restored the natural order of things to Cardiff, with no intervention from the Torchwood gang for once…
And there is, of course. You need to tell the camera whether you’re shooting from right to left (as I had) or left to right before you begin to take the pictures. It’s on page 38 of the manual. I’d assumed that, in common with most of the other manuals I’ve got at home, anything that far inside must be printed in some Eastern European language.
For our Psychology in Everyday Life presentation, we had to choose a gadget we’d acquired recently, or work in groups on an unfamiliar gadget, and assess whether the manual was intelligible for an entry-level user. We were chatting about ideas in the seminar. Tim R., our lecturer, seems about as technophobic as Phil, so that made me think of my camera. After all, I had the raw material and experience at hand. It made everyone chuckle as my slides unfolded, to end with this rather witty trio: 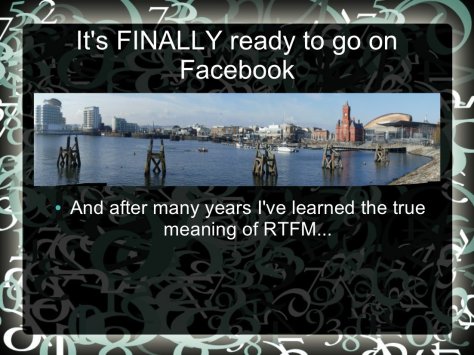 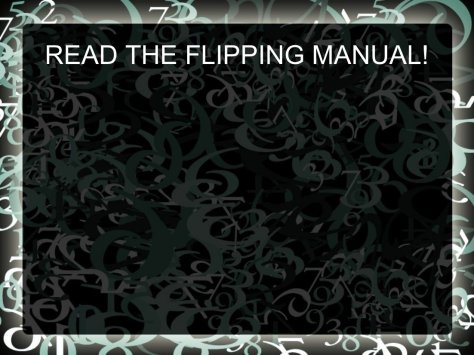 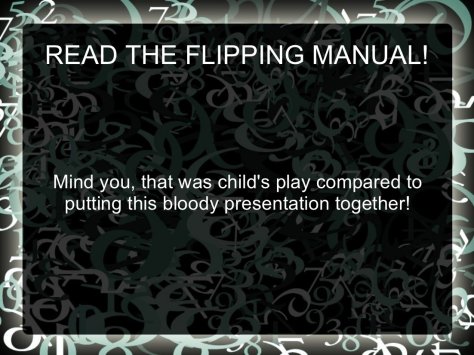 And thereby hangs a tale …
Advertisement