In which The Author plays computer games with the Government

On Monday, my current encounter with depression led me to the surgery, and a change of medication. I saw Dr Mahmoud and told her about the events of the last month or so (see The Dog, The Dog, He’s Doing it Again.) After discussing my situation, she suggested cutting down my daily dose of Citalopram from 40mg to 20mg, and introducing 15mg of Mirtazepine to the mix. The plan is to gradually replace one with the other. So far, so good. I took the first of the new tablets before going to bed on Monday night, and slept through some of the very strangest lucid dreams I’ve experienced for a long time.
I didn’t venture downstairs until yesterday afternoon, and after a couple of slices of toast I made my way into town, still not entirely sure whether I was awake or not. I called into the Prince for a glass of Coke and to check my emails, but I couldn’t concentrate on the conversation. Luckily for me, there weren’t many people in there, so I was able to get on with the main task of the afternoon – filling in the online claim form for Employment & Support Allowance.
Kayleigh, my placement adviser, had suggested claiming ESA when we met on Friday. My low mood is preventing me from doing anything much at the moment (apart from trying to sleep), so she said it would be worth filling in the application.
When I claimed Jobseekers Allowance after the premature end of my university life, that was easy enough. I went through the online form at home, submitted it electronically, and the following day a chap called me to verify a couple of my answers. Then I had to call into the Jokecentre, sign a couple of forms, and I was in the system. Easy. Given David Cameron’s emphasis on cost-saving, and his famous claim that everyone’s dealings with government bodies would soon be ‘digital by default’, I expected something similar.
In fairness to the Department of Work and Pensions, I was nearly right. I was able to download a form to the Netbook, which was editable within Adobe Reader. It was a good thing I’d decided to install that package for Linux, really. Until now, I’ve used the Document Viewer which comes as part of Ubuntu. Judging from the first page, it seems unlikely that the ‘edit’ function would work in anything other than Adobe Reader.

Anyway, over half an hour and 52 pages (!) later I came to the end. I knew I’d have to finish it off when I had the details of my mortgage to hand, so I saved it. Then I saw the problem. I needed to print the form out and sign the declaration at the bottom. With the JSA form, I only needed to clink SUBMIT and I was finished. I doubt if I’ve got enough ink or paper at home to print 52 pages, nor an envelope big enough to take it. If I went to the Library, I’d have had to pay 10p a page for printing. Even if I had managed to print it, there was no obvious way of finding out the address to send it to. The link on the site didn’t work.
The alternative was to phone for what could easily have been a 40-minute call (even after the ten minutes or so ‘on hold’ listening to Vivaldi while I waited to speak to a human being.) At 15p/min from my mobile, that was a non-runner as well. I waited until this afternoon and called the Freephone number from a callbox in town. As I’d anticipated, it took over five minutes until I spoke to someone. The first stage was to try and negotiate one of those voice-recognition systems where you have to tell the computer your postcode.
I said, very clearly, ‘C F forty-four, [etc].’
The computer said, ‘C F forty: Tonypandy. Is that correct? Yes or no?’
‘No!’
‘Please say the letters and numbers of your postcode.’
‘C F forty-four [etc].’
‘S A 4: Swansea. Is that correct? Yes or no?’
‘No!’
‘Please wait while we transfer you to an adviser.’
Finally I was getting somewhere.
After ten minutes or so, I’d explained my circumstances to a human being and requested a hard copy of the form in the post. I can’t put my hands on my mortgage paperwork at the moment, and I need to put my doctor’s paper in the envelope as well, so they can have it all in the pre-paid envelope they provide with the form. They send the paperwork out by second-class post (naturally, as they’re dealing with second-class citizens), and then take up to two weeks to process the forms, so I could be looking at another three weeks without any money.
Having said all that, I picked up an interesting email from the campaign group 38 Degrees this afternoon. If I’d been trying to claim Disability Living Allowance and/or Attendance Allowance, I’d have needed to try and find a PC running Internet Explorer 6. Yes, that’s right – IE6!
On January 4 2012, this report appeared on the BBC website:

In fact, courtesy of the DWP itself, here’s a complete list of the browsers that support its website: 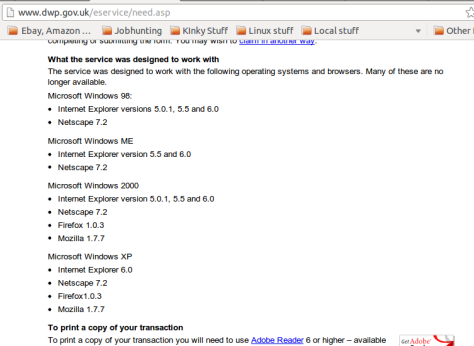 To judge from this it wouldn’t work in Aberdare Library, which is still using IE7. Even by our usual standards, the DWP is lagging way behind the rest of the world. According to the 38 Degrees website, ‘One political blogger was so amazed at the situation he thought that this was an April fools joke.’
He wasn’t far off the mark. I’ve just got to sit tight and wait for the postman to bring me the next instalment of my ongoing correspondence with the DWP.
As I keep telling everyone I ever speak to about politics, bureaucracy, the banks, the utility companies, public transport, or most other large businesses: ‘Welcome to the Twenty-First Century. It’s when everything changes. Sort of…’
I’ll keep you posted as this latest adventure unfolds, of course. Meanwhile, if you want to sign the 38 Degrees petition to get the website updated, you can click this link.
Advertisement