In which The Author is a midnight rambler

As I told you a little while ago, I’m trying to arrange to meet three different people on the same day in a city where I don’t live (see The Travelling Ex-Salesman’s Problem.) Nerys and I are meeting up for a pint; Shanara and I are arranging a coffee date in Cardiff; Martin H. and I have a meeting lined up. I also told you how I’d run out of talktime on my phone, so the whole trip was becoming unnecessarily complicated. Anyway, last night the pieces of the puzzle started to fall into place.
I nearly switched off my phone at 9 p.m., but some instinct in the back of my mind told me to leave it on. Sure enough, about ten minutes later Shanara rang me. During the conversation she reminded me that last night was the full moon – in fact, the ‘super moon’, when our satellite is at its closest approach to the Earth.
In true Welsh fashion, our midsummer was marked by frequent heavy showers interrupted by torrential downpours. However, yesterday evening the clouds started to disperse and the sun came out for half an hour or so. At 11.30 or so I decided to look out of the front door and see what the situation in the sky was. To my surprise, the full moon was very clearly visible from my street. 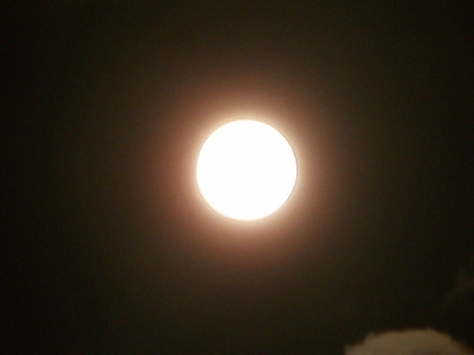 Although it’s not a bad hand-held photo, the effect was spoiled by the glare from the street lamps. I decided to take a little stroll around Trecynon and see whether I could find a spot which wasn’t unduly subject to light pollution. The first place I pitched my tripod was on the traffic island by the Mount Pleasant, overlooking the wall of the school.
[A digression: Until about five years ago, the following couple of photos would have been impossible. The old caretaker’s house, which used to adjoin the main building, was demolished fairly recently. Unfortunately, I didn’t have a decent camera at the time, so there won’t be any pictures of it on the Vanishing Valleys website.]

I was fairly pleased with this first one, even though I only had the little screen on the camera to view it with, so I took another couple. 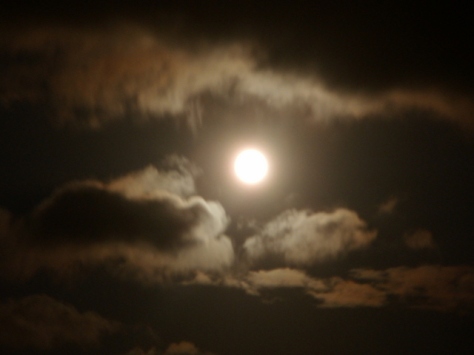 I quite like this next one – even though it demonstrates the perils of using the timer on the camera, the cloud somehow reminds me of the Black Sea as you’d see it on a map of Europe.

Behind me, I could hear the owner of the pub locking up for the night, so I decided to move on as well. I walked down Meirion Street as far as the level crossing, then followed the railway line as far as the gate leading to ‘Farmer’s Walk’. From there, it was a very short (but very dark) walk between overhanging trees into Cables Field, where I was completely shielded from any street lighting. This is where Stella and I used to come regularly, and it felt odd for two reasons: first, I didn’t have the Mad Labrador nagging me to play Stick every few moments; second, it was eerily quiet in the moonlight. I’d been expecting to hear an owl in the trees, or maybe see a couple of bats circling over the river. However, apart from the distant traffic on the main road, there was silence.
I pitched the tripod near the far side of the field and experimented with the settings. It didn’t take me long to regret not picking up my torch. I had to fiddle around with the controls (helpfully labelled in black on a black background) in near-darkness until I managed to find a reasonable setting. Even though my camera is nowhere near as advanced as the DSLR models on the market, I still managed to get some decent results. I stayed in the same spot for a few minutes, while the clouds shifted and the sky changed constantly. 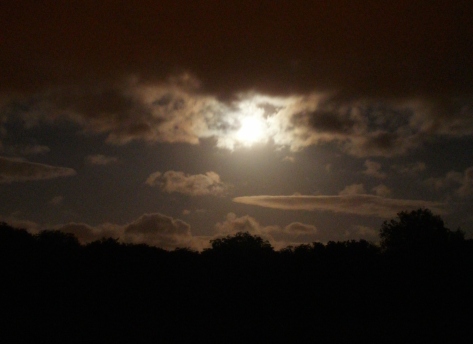 I got some rather pleasing results as the cloud patterns swirled and recombined. After a few minutes I decided to try and ‘frame’ the moon with a tree as one side of the image. This idea worked nicely when I eventually got the tripod to stay still on the uneven ground: 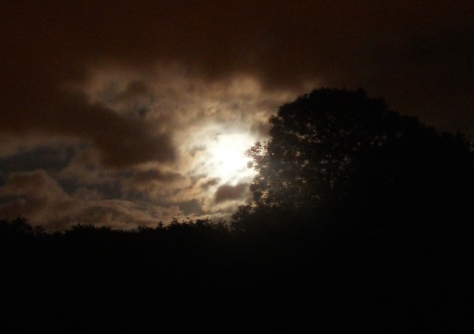 Feeling it rather strange to be in the field at nearly midnight (especially without Stella moithering around), I walked back to the railway line. I looked back towards the level crossing and decided that it was a photo waiting to happen. 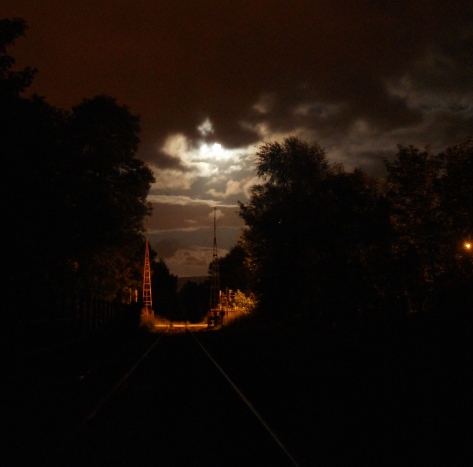 But I hadn’t finished. I had a better idea in mind. I hadn’t been able to make it to Avebury this year (again!) in spite of mentioning it in Getting Stoned, but I could manage something similar a bit closer to home. In 1956 the National Eisteddfod came to Aberdare, and the Gorsedd of Bards erected their traditional stone circle in the Park. Less than five minutes’ walk from my house, I had my own little megalithic monument. It seemed daft not to give it a try.
I haven’t been into Aberdare Park after hours since my unscheduled swim many years ago (see ‘He’s Fallen in the Water!’) and I was a bit apprehensive at first. For one thing, it’s a popular place for teenagers to gather once the gates are locked, causing trouble fuelled by illicit drink and drugs. For another, the police sometimes carry out surprise visits to round up the aforesaid teenagers. Even so, when I arrived at the side gate, there was no sign of life. It didn’t take me long to climb over the gate and walk up to the stones. Unfortunately, I hadn’t taken account of the little avenue of trees nearby, which constituted an artificial skyline. What might have been decent silhouettes of the stones instead became a selection of abstract black shapes on coloured backgrounds. 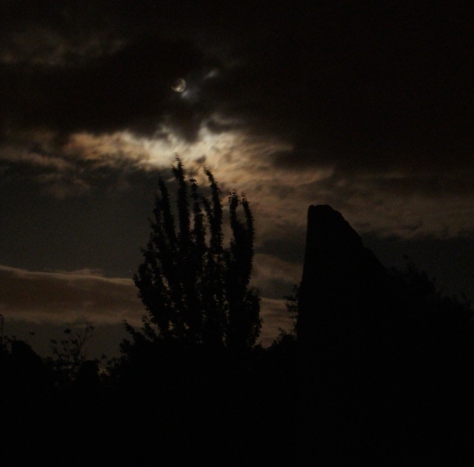 Things were coming together very nicely, and then Fate took a hand. The last time I was using a camera near the Gorsedd Circle, a sudden gust of wind blew the tripod over. The resulting sideways slide can be seen quite clearly on the video clip of Replaced By Robots playing ‘Transmissions from a Digital Heart’, towards the end of their squatted gig last year (see Robot Invasion of Earth (Phase II).) Last night, exactly the same thing happened again. Fortunately, the shutter had just opened on a nice long exposure. This was the unintended end result:

As Neil G. said earlier on, even if I’d tried for hours I wouldn’t have got a photo like that. My camera just doesn’t have the flexibility of a DSLR to set up a long exposure manually. It was pure chance; serendipity in the true sense of the word.
It was getting very cold by then, so I packed up my gear, hopped back over the wall and went home to experience yet more bizarre dreams, courtesy of my new medication. Next year, I’m going to pencil in Avebury (yet again!) for the midsummer period. Until then – keep watching the skies…!
Advertisement

In which The Author and his friend have some technical difficulties

I know you might find this hard to believe, but Huw F. and I have just spent the best part of an hour buying train tickets to London.
I’d already spent twenty minutes or so online this afternoon, comparing alternative modes of transport for a little excursion next week. I’d eventually found a decent train journey which was fairly affordable, and Huw arranged to meet me this evening to sort out the booking on his plastic.
We negotiated the maze of the National Rail Enquries website yet again, going through hoops until we finally managed to find the tickets we wanted. Then we had to pay for them. Easy!, I hear you cry. If only…
The situation was complicated by the fact that Huw’s phone refused to connect to The Cloud in the pub. We had to use my Netbook, which (of course) didn’t have Huw’s details for his First Great Western account. Huw keyed in his email address, which it rejected, needless to say. We fucked around for about quarter of an hour more while he requested a password reset, a further ten minutes while he accessed his emails to retrieve the reset link, and five minutes or so while he went through a three-stage process to verify his credit card details. If we’d left Aberdare on a train when we started sorting it out, we could actually have been approaching Cardiff by the time we finished.
Earlier this afternoon, I’d wasted about half an hour trying to change the registered email address for my YouTube channel. (I’d spent a similarly fruitless hour-plus trying to revive my dormant Flickr account a few months ago. On that occasion, after verifying and re-verifying my information with Yahoo! a dozen times, I thought ‘fuck it’ and uploaded my photos to Photobucket instead.) This afternoon, I thought ‘fuck it’ and set up a Vimeo account. My Flickr and YouTube accounts need to be accessed through email addresses which I no longer use. Eventually, no doubt, like abandoned buildings in the Digital City, the content I’ve uploaded will be left to decay and fall to pieces.
I imagine that there must be millions of these derelict websites and crumbling archives in Cyberspace, like some hybrid vision dreamed up by J.G. Ballard and William Gibson. Their upkeep has become prohibitively expensive. In the real world, people run out of money. In the online world, people simply don’t have the time (or maybe just the patience) to try and maintain them. (I mentioned the real-world relationship between Time and Money in The Travelling Ex-Salesman’s Problem. In the virtual world, the relationship isn’t inverse, but linear.)
After my experiences with various websites (see ‘What Do You Want?’ – ‘Information!’, A Farey Tale, Digital By Default (almost…) and W.W.W.W.W.W (Part 1), amongst other posts), I’m starting to sympathise with people for whom the Twenty-First Century feels like an unnecessary imposition. As someone who’s fairly au fait with the ‘new’ technology (see I’m Sorry, I Haven’t a Clue), I should be able to negotiate this virtual obstacle course with relative ease.
Nevertheless, I’m getting a sinking feeling that the people who design websites aimed at ‘the general public’ never actually use them. They look very nice, and have all the bells and whistles, and I’m sure their source code are veritable paragons of W3C specifications – but if you end up wanting to throw your own Netbook across the fucking pub, do we really need one of the Loteks to do it for you…?