In which The Author develops a new addiction

As I’ve mentioned before, my non-prescribed drug of choice comes in a pint glass, sometimes a can, or (very occasionally) an optic. Mind you, after a totally lost weekend last November involving a bottle of white wine, a fair amount of vodka, twenty-four hours of sickness, and numerous Unexplained Drunken Injuries, I think I’ll stick to pints from now on.
A great many of my friends are smokers, and a fair number of them have tried giving up (with mixed results) over the years. Jason D., my old work pal, is on the nicotine wagon again – possibly his fifth or sixth attempt at kicking the habit. He seems to be doing okay this time around, but he’s a long way behind Mark Twain. That legendary cigar-chomping wit once said, ‘Giving up smoking is the easiest thing in the world. I’ve done it thousands of times.’ I know a fair number of dope smokers as well, and very few of them have ever talked about giving up. Draw your own conclusions, folks…
Meanwhile, judging from what I see, hear and read in the local papers, it’s pretty easy to get hold of just about any substance you like if you know the wrong people. I know a number of people who’ve gone down the heroin route over the years, and I’ve been offered pretty much everything over the years. Those drugs have never interested me. Considering that a fair proportion of the music I listen to, the books I read and the films I watch could be considered as drug-inspired, it’s odd that I’ve never gone down that road. Maybe I’m content to just get passively wasted and let other people suffer the ill effects.
Mind you, the dreams I’ve had since switching to my new medication have been quite spectacularly weird. About a fortnight ago I dreamt that an unknown woman and I were assigned to steal secrets from a shadowy corporate building in London. It was like a surreal episode of Spooks – and yes, before you ask, my mystery accomplice was wearing a black poloneck sweater. Their security people pursued us to the rooftop, where we were caught up in a gun battle with them, the police, and two chavvy girls who were just there to score drugs. It segued seamlessly into a branch of Iceland, where the manager had gone berserk and smashed up all the freezers and fridges. Who needs LSD when you can take Mirtazepine, eh?
No, my addiction is much more in keeping with my general lifestyle. I’ve been a cryptic crossword enthusiast for years, starting with The Guardian and working my way up to the weird ones, as I related in A Turn-out For the Books.
I never jumped on the Sudoku bandwagon, though. It’s a good logic puzzle, I suppose, but people who claim that it exercises your mathematical faculties are way wide of the mark. You don’t actually need any mathematical knowledge to do Sudoku – any random assortment of nine arbitrary symbols would do just as well, whether you chose letters of the alphabet, the names of different fruits, or even symbols from the Wingdings font.
[A digression: When the 11th edition of The Chambers Dictionary came out, I thought it would be a nice idea to make a display near the Games and Pastimes section in Waterstone’s. I highlighted the new edition, surrounded it with cryptic crossword books from The Guardian, Daily Telegraph and Times stables, and made a header on the computer in the office. It read:
Su Doku is Japanese for ‘Just for little girls’ – are you ready for a real challenge?
All was well and good until Yasmine, who was a huge Sudoku fan, spotted it on her way to the staff room. I swear it’s the only time I’ve seem someone completely incandescent with rage, with steam coming from her ears.]
In terms of Japanese logic puzzles, the next step up is Kakuro, where you do need to be able to add up – as far as 45, anyway. They look like crosswords, only with numbers instead of letters, like this: 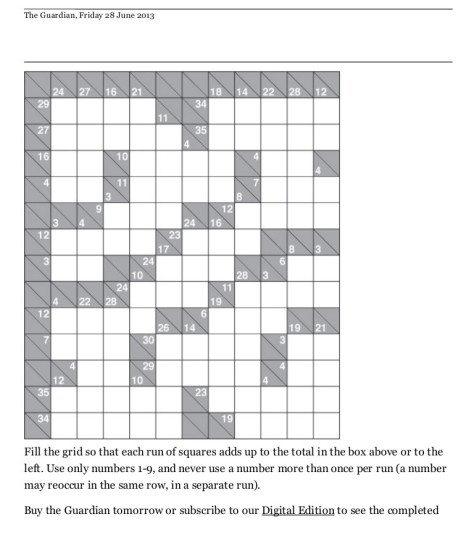 I didn’t have the foggiest idea what to do next, so I clicked the ‘hint’ button a few times. After watching several pairs of matching tiles disappear in short order, I thought I had the general idea. I clicked a few pairs of tiles myself. Some of them vanished, and others stayed stubbornly put. There didn’t seem to be any underlying reason for this difference in behaviour. I could have given up there and then, but I have to admit that I was intrigued.
I hunted around until I found a pull-down menu with an outline of the game. It turns out that you can remove a matching pair if, and only if, at least one long side of each tile is not touching another. For example, I could get rid of the blue blocks at the left-hand side and in the bottom-but-last row, but not the one in the bottom row (because it’s hemmed in by its neighbours.) The pair of tiles with the two blue coins can go as well; so can the pair with the four blue coins, and so forth. After removing a few pairs, the picture becomes a bit clearer.

The tricky part comes about because the tiles aren’t on a two-dimensional surface. They’re actually built up in layers, like a little ziggurat, so that the tiles in the centre conceal the ones beneath. As you whittle away at the structure, the hidden tiles are exposed, and matching pairs become harder to find.

It doesn’t surprise me that this game originated in China, with variations found in Japan and Korea. There’s a certain Zen simplicity to it, coupled with a fiendish logical structure which also characterises the popular newspaper games like Kakuro. I imagine that competitive Mahjong would be as mind-stretching as chess, as many various possibilities unfold with each move.
Well, I persevered with the Easy game, averaging ten minutes or so before I completed the clearance about half the time. The rest of the time (as with Kakuro), I got hopelessly sidetracked and abandoned the game. The program allows you to retrace your steps and try a different tack, but (like Kakuro) it’s very difficult to pinpoint the move where everything went supine.
The music played on, and I played on, and before I realised where the time had gone it was five a.m. I switched the Netbook off and went to bed for a few hours. I think I must have almost reached the point where my body clock will reset itself; I woke up at about half past nine feeling as though I’d had a decent few hours’ sleep for a change. I played a few more games before I came out this afternoon, just to check that last night wasn’t a fluke. I’ve also got the weekend’s selection of crosswords (and the Kakuro) to look at when I get home.
So, I’m going to stand up before my readers and make the following declaration: My name is Steve and I’m a puzzle-a-holic. Wow, I feel much better for just admitting it!
Now, I’m wondering whether I can combine my penchant for Japanese-style puzzles with another imported pastime which is catching on in certain circles: Shibari, the art of Japanese rope bondage. I bet nobody’s come up with that idea before. If any young women would be interested in solving logic puzzles while secured to various fixtures and fittings with yards and yards of soft rope, you know where to contact me…
Advertisement

3 thoughts on “A Night on the Tiles”