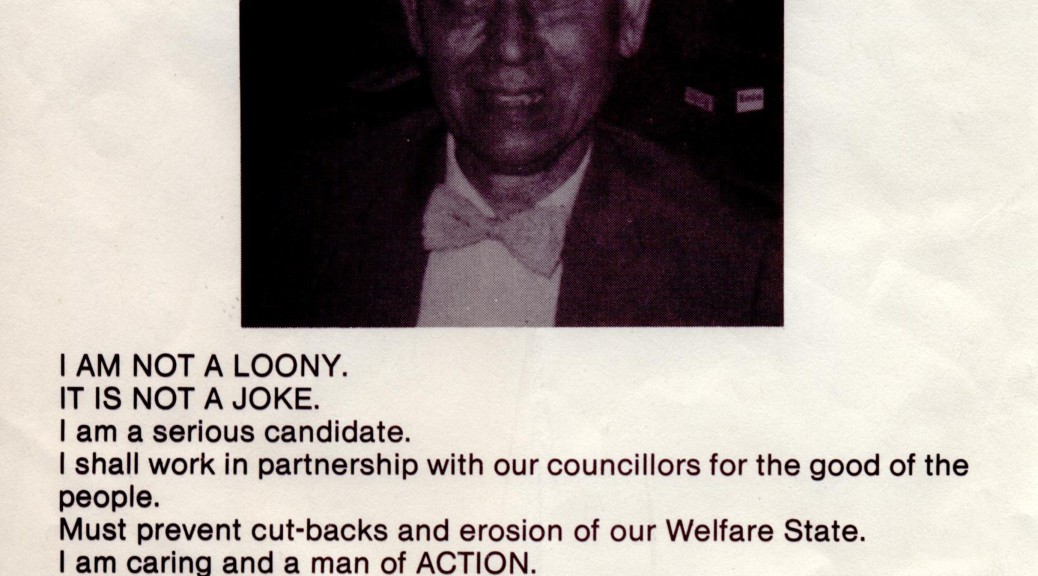 In which The Author recalls a colourful character

My friend Ross D. and I were having a daft conversation on Facebook, a couple of days ago, and he mentioned someone I’d almost forgotten about. I’d posted the following status about someone who’d walked up to the desk in the Reference section of Aberdare Library:
Library Fuckwittery (Part 6,371) – A woman complaining to the Reference Librarian that the cooker in her new house doesn’t work and her garage door is leaking. I think she’s got this building confused with one of the following:
a) The Rock Grounds
b) CAB
c) An office staffed by people who actually give a fuck.
A number of my friends commented on it, including Ross, who said:
It obviously hasn’t changed much over the years. Do you remember ‘Where can I find the bonking?’
Where do I begin to explain this cryptic comment?
I suppose the best place would be to start at the beginning of our own friendship, and to go from there.
Ross and I first met in September 1986, when we were working on a research project called the Cynon Valley Profile. Although we weren’t employed directly by the library, our team was based in the research room adjoining the Reference Library. We used to spend a lot of time in the big room, though, which is where we first encountered an elderly chap by the name of Noel Rencontre. After our exchange on Facebook, Ross had tried to describe this curious character to his partner Richard, but it’s very difficult to sum him up accurately.
Mr Rencontre’s name was already vaguely familiar to some of us, as he’d stood for Parliament in 1984. Ioan Evans, the previous Cynon Valley MP, had passed away at the age of only 56. A by-election was called, and seven candidates contested the seat on 3 May that year:
Ann Clwyd has been our MP ever since. Meanwhile, the remarkable surge by the Social Democrats has been explained by a combination of a popular local candidate and the novelty factor of the SDP (the party had been founded three years earlier). It didn’t last, of course. Cynon Valley has been pretty much a two-horse race between Labour and Plaid Cymru ever since.
But look at the table again – a Womble Independent candidate had beaten a ‘serious’ candidate into last place? Who was this mysterious man, who’d lost his deposit but given the people of the Cynon Valley some entertainment at the same time?
We found out for ourselves in the summer of 1987, when a small, sprightly, white-haired chap came into the Reference Library. In a loud voice with what sounded like a mid-European accent, he demanded to know where he could find ‘bonking.’
The tennis star Boris Becker had had a run of bad luck, and the tabloid papers knew where the blame lay. According to the Sun and the Daily Star, Mr Becker had been paying too little attention to his game and too much attention to his girlfriend. ‘Bonking Boris’ was headline news, both on the front and back pages of the newspapers.
This term was a new one on our visitor. He told us that, when he was a young man, people used to call it ‘jig-a-jig’ instead. This wonderfully eccentric old boy turned out to be none other than Noel Rencontre.
By now his name was a bit more familiar, as he’d stood in the local elections a few weeks earlier. Some of us had seen him ‘on the stump’ in Victoria Square, wearing what seemed to be a painted laboratory coat, and with a ghetto blaster at his feet playing ‘The Wombling Song’ at full volume. We’d also seen his name on several letters in the Aberdare Leader, but it was the first time we’d encountered him in the flesh. It was a case of ‘once met, never forgotten.’
To prove this, I called into Aberdare Library this afternoon and had a word with Steven G., who’s worked there since before the Profile days. As soon as I mentioned the name ‘Mr Rencontre,’ he beamed with delight.
‘Ah yes,’ he laughed, ‘the Womble.’
He vanished into the research room, and before too long he’d dug out some documents. They were in one of a couple of hundred boxes in the cluttered tiny space where (almost unbelievably) we used to work. Here’s part of the official election candidate list from May 1984.

There was more information in another box. It must have been among the materials we’d accumulated during our research, as we worked through the 1987 election campaign. This little piece appeared in the Aberdare Leader, where the paper gave brief pen portraits of the candidates in the local wards:

Even better, we’d archived one of Mr Rencontre’s election leaflets: 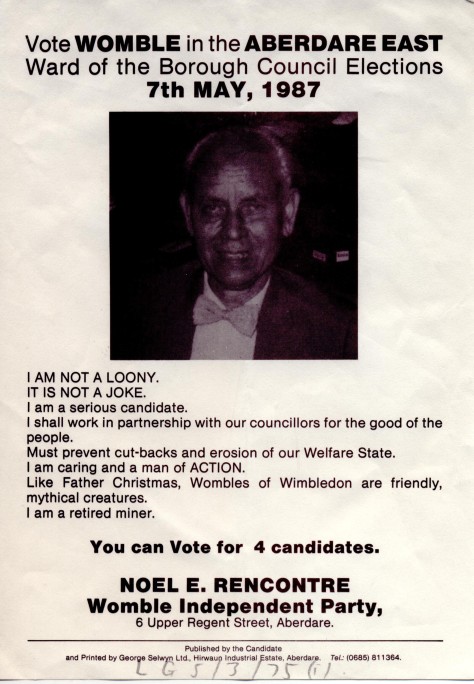 Steven also searched through the card index before digging out some of the old cuttings books. In the age before the Internet, if a story relating to the Cynon Valley made the regional or national newspapers, they were clipped and glued into a series of hardback exercise books. (They must go back for decades!)
Mr Rencontre had had two letters printed in the Western Mail within a couple of months. I remember that he also had a number of letters published in the Aberdare Leader, but they’re not indexed, so it would take us ages to track them down. It calls for a brute force approach of just scrolling through them on microfilm. (That’s why my own Collected Letters to the Editor are incomplete.) Here are the two that made it into Wales’s national daily paper.

The second one is interesting. Have a look at Mr Rencontre’s description in the list of election candidates. The work study engineer who was forced to retire at 55 is obviously a reference to himself.
After this brief foray into local politics, Mr Rencontre vanished from the radar entirely. His letters dried up, and his colourful interventions in the life of Aberdare seemed to be over. Until Geraint Benney stood for Plaid Cymru in 2005, and brought some zany humour to the traditional grey Valleys politics, there was nothing comparable to disrupt a series of lacklustre election campaigns.
There’s a sad postscript to this story. While we were chatting, Steven had a quick look on one of the genealogical databases. Then he went back to the Leader on microfilm and found this:

Mr Rencontre lived to the grand age of 83. For a brief time he brightened up the political scene in the Cynon Valley, amused us with his eccentric letters to the press, and ensured an enduring place in our collective memories. May he rest in peace.
Advertisement