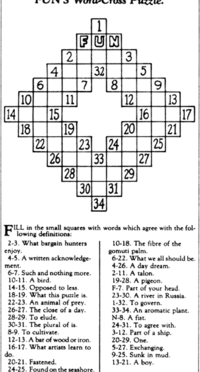 In which The Author sings the praises of Arthur Wynne

I bet that’s a name which not many people know. Arthur Wynne was a British journalist, who was born in Liverpool in 1871 and who emigrated to the USA at the age of nineteen. He worked on the Pittsburgh Press and played violin with the Pittsburgh Symphony Orchestra before moving to New York. While working on the New York World he came up with a very simple idea. In retrospect, you wonder what took people so long to think of it. On December 21, 1913, New York World published this: