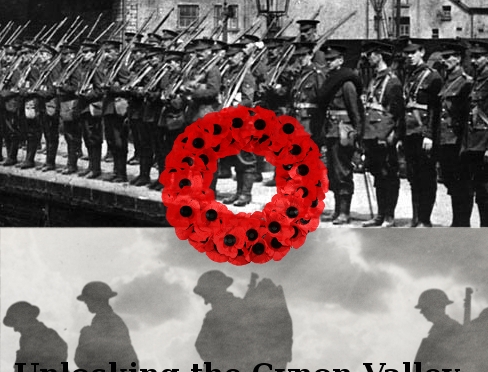 In which The Author sends an email and receives an email

The email I sent wasn’t just any old email, mind you. I send dozens of those a week and I don’t write a blog about most of them. However, this one was different.
It was the final submission of a book, with some extra notes for the printers. Like sending an essay in when I was a student, it’s an important psychological milestone. It’s the point of no return – after this, nothing can be changed. All the possible amendments and afterthoughts are now firmly in one of the Parallel Universes where things like that live.
As my regular readers already know, I’ve spent several weeks working with my friend Geoff E. on his forthcoming book about the Cynon Valley servicemen who died in the Great War. I’m pleased to say that it’s been a most rewarding experience.
I’ve learned a great deal about the history of my home town. I’ve made some new friends, notably Fr Robert Davies and his wife Christina, from St Elvan’s Church in Aberdare. I’ve taken some fairly decent photos, and in the process I’ve paid far more attention to local monuments than I would have otherwise.
I’ve even met one of my regular readers in the flesh: Dr Colin Rees, a former Aberdare boy and local history enthusiast, was generous enough to nominate this here blog for archiving by the British Library, no less. He called into Aberdare Library one day last week, while Geoff and I were putting the finishing touches to the typescript. Geoff introduced us, and it was great to be able to put a face to a name after a couple of years. Colin very kindly emailed me earlier, with some feedback about my last entry and a link to a useful map archive. (Incidentally, Colin’s idea about where Trecynon ends and the Gadlys begins pretty much coincides with mine.)
On a more practical side, I’ve acquired a lot of useful hints and tips about LibreOffice, the Open Source (and largely undocumented) alternative to Microsoft Office. I now know how to use page styles, and am slowly coming to terms with the automated Table of Contents feature. I’ve also learned that even my non-existent artistic side can be compensated for with a small amount of GIMP know-how. Obviously, this isn’t how the finished version will look, but considering that I once came 33rd in Art in school – and there were only 31 of us in the class – I don’t think my first attempt at a book cover was too shabby. 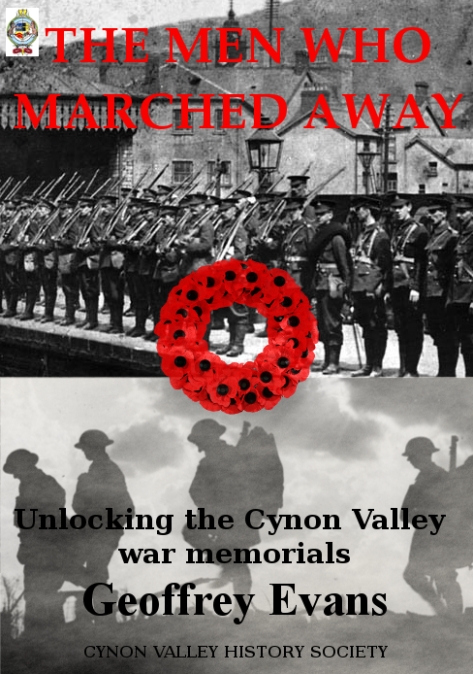 In addition to all that, I’ve met the printer and talked Tech Speak with him for a while. That means I’ve actually been intimately involved with the production of a book. I’ve sold hundreds of thousands of the things over the years, but being at the other end of the supply chain has been a fantastic experience.
Geoff did the research and the lion’s share of the writing, of course, and justifiably it’s his name that appears on the cover. Even so, I get a Mention in Dispatches and some photo credits. That’s not a bad outcome from a throwaway remark in conversation about six months ago, is it?
We made the final amendments to the typescript this morning, and then repaired to the pub. Geoff had promised me a pint anyway. Since the Aberdare Library wifi had decided to take a unscheduled long weekend, we headed for the Conway and sent the finished files to Emyr at Dinefwr Press from there. Geoff rang him when he got home, and then texted me to confirm that everything had arrived safely. It’s quite extraordinary to think that in three weeks’ time, we’ll probably be driving back to Llandybie to pick up the finished copies.
It’s a testament to the technology the publishing industry has at its disposal these days that we can talk of a turnaround in terms of days, rather than months – or even years. Just before I finished in the book trade, I remember a bizarre story which appeared in The Bookseller.
A mysterious book had arrived in the post at a small shop somewhere in England. Nobody in the shop could remember ordering it. After they dug through the paperwork, there was still no trace of the original order. A phone call to the publishers soon elicited the truth: the book had been ‘subbed’ (sold in as part of a ‘subscription’ order) by the rep – in 1975! Unsurprisingly, anyone who would have remembered the original order would have moved on or retired (or possibly died) by the time the book finally saw the light of day.
It certainly put the occasional five- or six-year delay on an academic textbook into perspective. (Having said that, I did start to worry that if Geoff unearthed any more interesting sidelights, we’d be lucky to get the damned thing finished before we commemorated the centenary of the Armistice.)
So, it’s finally all over. In the book, Geoff quotes a letter from Lt Fred Radford, a soldier from Abercynon, written immediately after the end of hostilities in November 1918. At one point, Lt Radford says, ‘How tame life will be now without the moments of excitement.’ I feel a similar sense of anticlimax, now the typescript has gone to the printer. In fact, I’m going to adapt Lt Radford’s words to suit my own circumstances:
No longer will I be bombarded with emails at all hours of the day and night, with extra bits of research to add to the ‘in progress’ pile. How strange not to see obscure memorials in chapels I’d thought had closed years ago, to experiment with obscure aspects of software, wondering how long it will be until it all fucks up, occasionally forced to take cover in the pub because the Library is full of Loteks and bores. I have realised my ambition. I have seen the end and cannot but give thanks for this. How strange it all seems, not a email pinging, no fear of rewrites, photos or software glitches – it is astounding.
Except, of course, that it isn’t the end.
Earlier on, Geoff showed me some of the work which he’d done on the Street Names project. It sounds as though he’d be happy to collaborate on a book based on our shared research. In the meantime, Colin himself emailed me, asking when Geoff was going to finish off yet another book he’s been working on for ages.
I’ve got a funny feeling that I might have signed on for the duration – and beyond.
Advertisement