In which The Author has a very peculiar morning

As my regular readers won’t be surprised to learn, the arrival of the cold and damp weather here in Wales has had its usual effect on this ageing body of mine. My back has been giving me some grief for a couple of weeks. I probably didn’t help myself by standing out in the pouring rain on Remembrance Sunday. I haven’t been to the service for a couple of years, but I made a special effort to get up early and head to the ‘cenotaph’ in town. After reading about all the men from Aberdare who didn’t return from the Great War, the least I could was to go down and pay my respects in person. I seem to be paying the price for it now, though.
As well as my back problem, my old shoulder complaint is peeking around the corner every so often. As a result I’m back on the Co-codamol fairly regularly, as well as some anti-inflammatories which have undesirable effects on my stomach. Given that it’s very difficult to find a comfortable position in bed, I’m getting a couple of hours’ sleep every night at best.
To add insult to injury, my noisy neighbours appear to have moved out quite abruptly, and now the builders are in instead. They arrived at about 8.30 this morning, and immediately started hammering on the party wall. After about half an hour I conceded defeat and headed out for some fresh air and exercise.
I say ‘exercise’ – that actually lasted as far as the bus stop near the school. The bus was approaching, so I decided to jump on rather than walk into town. Then it crossed my mind that it would go right through to Glynhafod, passing through Aberaman and Cwmaman en route. The early morning mist was burning off nicely, and there was even a patch of blue sky over Cwmbach. It seemed like a good excuse to take the camera for a stroll, and maybe track down some more Aberdare Local Board of Health street signs. I wanted to do a bit of on-the-ground research for the joint project with Geoff E., too, which would take me into that neck of the woods. With the idea fresh in my mind, I paid a bit extra and bought a through ticket to Aberaman.
At least, I think I did. Let me explain…
Some years ago I read an intriguing article about the phenomenon of Lucid Dreaming. Put simply, it’s a stage of sleep wherein you’re aware that you’re dreaming, and so can alter the course of events consciously. I’ve been doing this involuntarily for years, so it’s a subject which has been of interest to me since I first heard of it. (In fact, when I was a student the second time around, I lent a book on the subject to Gareth M., one of our psychology lecturers.) Anyway, according to the article I read, one of the indications that you’ve entered this strange state of consciousness is that texts don’t read the same way twice. If you read something in a Lucid Dream, and then re-read it immediately, it’ll be different the second time.
So much for the theory.
When the bus got to Aberdare, Kristy got on, heading back home. She’d been in town early on a Thursday morning as usual. We used to meet up regularly for coffee every week, and we’ve pencilled in a catch-up for next week. It’s more likely to be next year, knowing Kristy.
I got off by the Blaengwawr pub and headed into the side streets. I hit lucky straight away, with not one but two old signposts in Henry Street. The second one, fixed to the upper storey of an old stone house, looks fantastic. If I had one of these signs on the front of my house, I’d do anything to preserve it in this condition.

This is an area of Aberaman which I’ve only explored a couple of times. The first time, Stella and I had gone for a long walk along the old canal, cut through the Ynys playing fields, walked over the footbridge, and emerged near Violet Street. I was disappointed at not finding more of the old signposts in the vicinity. I followed my nose into Gwalia Terrace, and then into Tudor Place. The latter is one of the streets on our list, but it seems that the modern houses there simply share a name with the original row of cottages.
I crossed the brook and followed my nose again, wandering through a couple of side streets before emerging at Saron Chapel. I knew exactly where I was now: Lewis Street, the main shopping street of Aberaman itself. I headed for the southern end, crossed Cardiff Road, and walked up Mount Hill Street, all the while looking out for the distinctive shape of the Board of Health signs.
I drew a blank there, so I ventured into Commerce Place instead. At least, that’s what I think the sign said. Then I looked again. 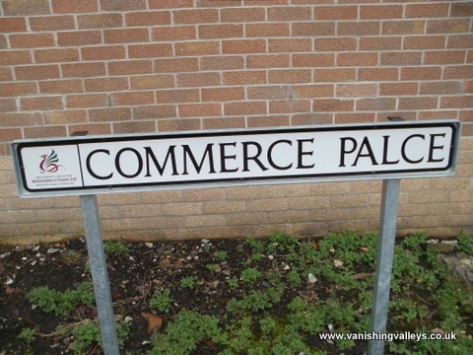 ‘That was odd,’ I thought.
I carried on walking, heading in the general direction of Aberaman Surgery. This is part of my own GPs’ practice, so I’ve been there a few times when the Aberdare surgery is fully booked. I was walking past the new flats when another sign caught my eye. Once again, the Altered State of Consciousness warning was there when I read it a second time.

By now, I was convinced that the codeine had kicked in. I wasn’t walking around Aberaman at all – I was still tucked up in bed, having a particularly vivid lucid dream.
I found another old sign at the corner of Regent Street, so I changed direction and headed towards Godreaman instead. These are old streets, so I managed to convince myself that I’d strike a rich seam of Board of Health signage. I was very disappointed when I didn’t find a single one. However, in Pleasant View the codeine struck again.

At this stage the lucid dreaming part of my mind was thinking, ‘What the actual fuck is going on?’, while the proofreading part was whimpering in a corner.
I dropped back onto Jubilee Road and headed towards the Bonki. Here, something else unusual caught my eye. A police van was parked opposite the corner, and three officers were standing outside a house, shouting up at the first floor window. As I walked on, the front door opened to reveal a dodgy-looking bloke in a t-shirt and tracksuit bottoms. It occurred to me that I might have just witnessed my first ever drugs bust. Fortunately, I had the good sense not to take any photos.
I decided that the long walk into Cwmaman could wait for another day, and retraced my steps as far as the Jubilee Bakery. Here I encountered a familiar Aberdare figure: Johnny No Shoes. (There are no prizes for guessing where his nickname originates!) Now I knew that I was definitely in an altered state, because he was wearing a sturdy pair of boots.
I explored New Street and Ffrwd Street, but failed to find any more old signs. I decided to call it a day, and followed the main road as far as the Aberaman Hotel. This used to be a huge old pub back in the day. I went there a few times, when the Cynon Valley Quiz League was still going strong. It’s been empty for ages and there’s no sign of any development work going on any time soon.

Now I wandered through some more long terraces, running roughly west uphill from Cardiff Road, hoping to find another batch of Victorian hangovers. To my surprise, the only one I spotted was right at the start of George Street, partly hidden behind a downpipe. I decided to call it a day and made my way back along Cardiff Road. The Rock was open, and I toyed with calling in for a livener. I remembered that I hadn’t been to the cashpoint, so I carried on walking towards town.
A casual glance up Mount Street turned up another sign. Like the one in Henry Street, it was on the front of a stone house, and looks very nice in its proper surroundings.
Back on Cardiff Road, I was surprised to find two Board of Health signs in fairly quick succession. The first is on the front of the old Phoenix Theatre Workshop; the second is on Number 1 Cardiff Road. Now I was almost at the town centre. I was about to call it a day when I glanced up the stone steps towards Bethuel Street (I hereby challenge you to find that on a map) and saw the original sign for Dumfries Street attached to the end house. I climbed the steps and then spotted another original, this time for Wind Street, on the side of the old Oak pub, which became the Oak Shop, and which is now a private house.
I meandered through the side streets once more, finding another two signs in Dumfries Street, including this one, low down at the corner of Cross Street.

My final port of call was Rhian’s grandparents’ house. We had a pint on Monday, and she mentioned that they had an original sign for Bute Street on their house. I took a cheeky shot of that one and headed back towards the town centre. I’m expecting a text from Rhian any time, wondering why I was outside her grandparents’ house earlier today.
Finally, heading towards Aberdare Library, I glimpsed the original Ynysllwyd Street sign on the side of a house. Painted over to match the render, it seems a world away from the pristine Henry Street sign I’d found at the beginning of my expedition. 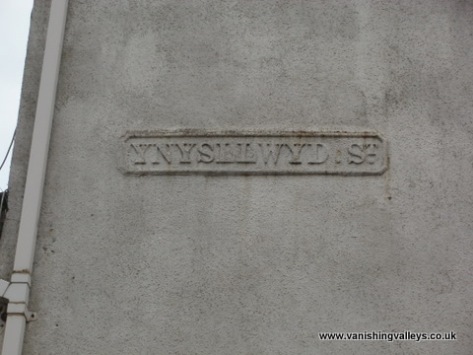 So, that’s what I’ve been up to today.
I think.
Of course, I could wake up at any moment and find out that the whole thing was just a codeine-fuelled lucid dream. It would certainly explain Johnny’s shoes and the whole mis-spelling thing, wouldn’t it?
Advertisement