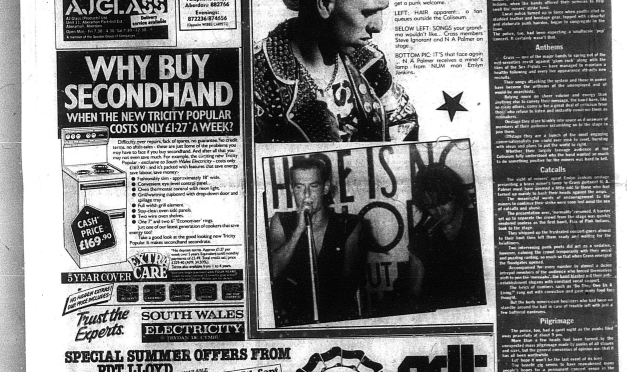 In which The Author asks for your help

As my regular readers will know, nearly thirty years ago I worked on a research project called the Cynon Valley Profile. We took countless photographs, archived no end of documents and news cuttings, and conducted interviews and vox pops covering most aspects of life in our little part of South Wales. We were picking up (after an interval of several years) where two notable individuals had broken off.
W. W. Price (1873-1967) was a schoolteacher who spent all his spare time and his long retirement in documenting the history of the local area. He amassed some 40,000 cards of genealogical data, boxes and boxes of transcripts and documents, and was published on many occasions. The research room at Aberdare Library is named after him.
Rev R. Ivor Parry (1908-75) was the minister of Siloa Chapel, although he trained as a historian. He wrote a regular column in the Aberdare Leader and also gathered a large archive of cuttings and other documents.
That was pretty much where we came in. During the two years of the Cynon Valley Profile we collected anything we could get our hands on: theatre programmes, posters for local shows, gig flyers… you name it! In fact, Noel Rencontre’s election leaflet, which I showed you in Underground, Overground, Wombling Free, was almost certainly part of our collection.
I’m writing this today because after September 1987, when the Cynon Valley Profile ended, History came to a virtual standstill. I’m not talking about Francis Fukuyama’s famous (and largely discredited) thesis about the triumph of liberal democracy. I’m talking about the history of the Cynon Valley. Let me explain…
The Aberdare Leader on microfilm is only indexed as far as the 1930s; that occupies a deep drawer of 5″ x 3″ cards in the Reference Library. The last ten years or so are indexed on the computer. Between the 1930s and the present millennium falls the shadow.
There are numerous hardback exercise books in the W. W. Price Room, with relevant cuttings from the regional papers, as well as the rare occasions when the Cynon Valley came to the attention of the wider world. They’re catalogued as well, but how much of the life of our communities actually makes the papers?
Here’s one example of a news story which is of great importance to the cultural life of our country. I’ve mentioned it a few times already in this blog. On 11 July 1984 the leading anarcho-punk band Crass played at the Coliseum in Trecynon. It turned out to be their last ever gig. It was only the second ‘proper’ gig I’d been to – and it changed my life, as well as the lives of many people I know now. I don’t think it’s documented anywhere, apart from this brief flurry of activity in our local paper: 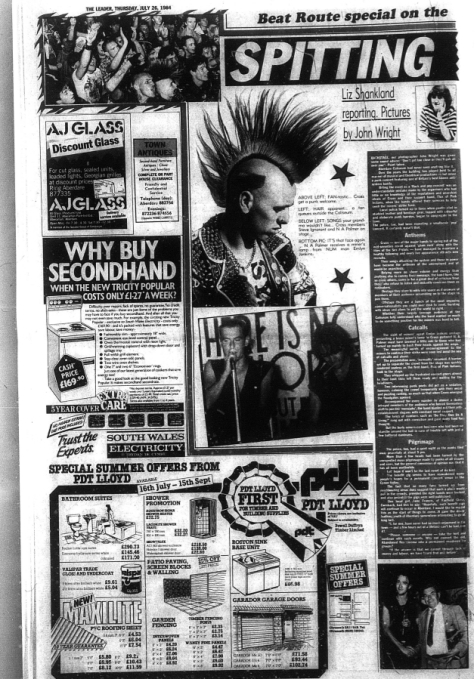 If you want to know anything about Crass’s final gig, this is pretty much the extent of what you’ll find. You won’t find this article or these photos online anywhere else, as far as I know. In spite of what you may have seen in US crime thrillers, you can’t just type the relevant words into a search engine and see newspaper stories from the 1980s on your computer screen in the blink of an eye. In the 1980s, there were no websites. You’re stuck with ploughing through the microfilms, or nothing.
Take a dispassionate look at your local paper in the present century. (Actually, I’ve saved you the trouble. Have a look at A Pressing Problem, in which I dissect a representative issue of our local rag and lay the specimen out for your delectation and reading pleasure.) Is your paper any different, in this age of electronic news-gathering and centralised churnalism? Does it really allow you to take the pulse of your community, to feel the lifeblood coursing through its veins? Where are the reports about the OAP committes, the PTA meetings, the am-dram musical performances, the community council notes, and all the other ephemera which go to make up the full, rounded picture of the town where you live?
The answer is simple: they’re nowhere.
They don’t get a mention at all, unless (as with our local rag) they appear in the Local Correspondents’ columns. Even when they do merit the odd couple of column-centimetres, they don’t get indexed. We’ve built ourselves a Memory Hole of gigantic proportions, down which an entire culture is disappearing as we speak.
At the moment, I’m surrounded by century-old Building Club minute books, and old maps showing Aberdare before half of the town centre was even built. It’s all good background to the Street Names Project, saved by the people who archived them decades ago. They didn’t know I’d be here, today, in this particular place, doing the research – but they saved these valuable items, just in case…
Now picture someone a century and a half down the line, trying to reconstruct (say) the cultural scene in Aberdare in the first decade of the millennium. He or she could quite reasonably conclude that it consisted solely of Stereophonics and countless Frank Vickery plays, interspersed with the occasional Shirley Bassey tribute act and the occasional young rock band who released their own music online. My other embryonic project will try and redress the balance in due course, but as far as the local archives are concerned, there’ll be nothing else for future historians to draw on.
That applies to every other aspect of modern life, too. The Internet will be around forever, but individual web pages come and go. There is a list of the old pubs of Aberdare and District in a book just around the corner from where I’m sitting at the moment, but it doesn’t appear anywhere online. A few years ago, apparently, it did. Then the money ran out or the server crashed, and that was the end of that. Fun while it lasted, like my old MySpace page.
That’s why I’m making this appeal today. If you’re a member of a band, a society, a musical group, a PTA, a sports team – in fact, if you’re involved with a local club or association of any kind – we need your help to profile the present.
(Quite by coincidence, Denise and Paula are currently trying to find some information about St Margaret’s RC School in Aberdare. Not the new school off Ty Fry, mind you – the old school, where a block of new houses have been built. I’ve made a mental note to ask my friend Kayleigh L., who’s the school secretary, if they’ve got any archive material of their own. If Denis had still been with us, we’d probably have been sorted, as he was on the board of governors. This is exactly the sort of thing that family history researchers and local historians are after. The librarians deal with enquiries like this all the time, every day, week in and week out. At the moment, Paula’s just blindly searching through the microfilms to see if something turns up. It’s a rather scattershot approach to what should be a fairly easy enquiry, isn’t it?)
As you can see, Aberdare Library would appreciate any contributions to their archives. Pretty much anything is grist to the mill here. You never know who’s going to walk in through the doors in fifty years’ time and ask to see a programme for Fiddler on the Roof, as performed by the Colstars in the Coliseum in 200x (insert date here – Ed.) Denise Price in the Reference Library would be grateful for anything they can add to the local collection. If you don’t want to donate it, a photocopy will be fine. Just please let them have a copy.
I daresay you’ve got a library in your neck of the woods which is in a similar situation (always assuming it hasn’t closed entirely, of course!) I’m sure your librarian would appreciate any donations to their archives, for exactly the reasons I’ve outlined.
Please spread the word about this, as it’s a really worthwhile project, and I’m sure we can count on your support. You can share this entry by several means, just by using the buttons at the foot of the page. If you don’t want to share it, then good old Word Of Mouth will do just fine.
On behalf of researchers everywhere, may I thank you in advance for your help.
Advertisement