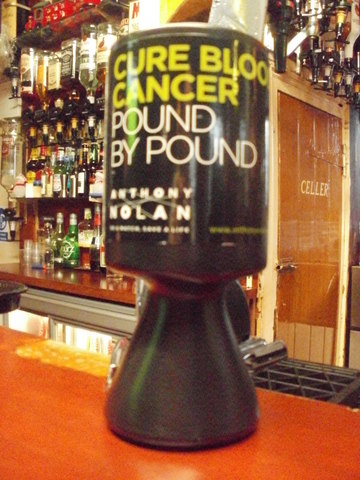 In which The Author pays some more money in

How’s this for a bizarre coincidence (again)?
I’d only just posted my latest fund-raising brainwave in House Music yesterday when I had a message on Facebook from my friend Thi Nga. The collection box for the Anthony Nolan Trust was full, and she wanted to know when I could call round and pick it up.
That particular box has been sitting on the counter of Thi Nga’s family’s takeaway, the Pagoda, on Gadlys Road, Aberdare since I first got my hands on half a dozen last summer.
As you might recall, I got involved with the charity through one of those chains of events which link random people in the global village. Mike Brandon, a young man from Bristol, was in dire need of a stem cell donor. Mike’s fiancee Kate is related to Terri, my mother’s next-door neighbour. I got involved with spreading the Shake4Mike campaign via social media (with retweets from, among others, Prof. Brian Cox, Robin Ince, Sandi Toksvig and Omid Djalili). The presss and TV news also covered Mike’s story, and it was all over the Internet for a few weeks. Donor registration skyrocketed in the wake of the media coverage, and by a miracle a suitable match was found.
I then decided to get involved with the fundraising side of things. I contacted the Anthony Nolan Trust, and they sent me seven collection boxes. Friends of mine with local businesses very kindly agreed to play host to them. As a result, they’re scattered quite widely over South Wales. David Turner, the owner of A1 Electrical Appliances, took two off my hands, one for his Aberdare shop and one for Treorchy. There’s another one in The Brunel Arms, Pontyclun, courtesy of Siân S., the landlady. Rebecca C. placed the final one at The Bridge, Ebbw Vale, a few months ago.
In the meantime, the one in The Glosters has been ticking over nicely. I’ve emptied it four times already, and the current total from that one alone is something like £115. It got welcome boosts from the autumn rugby tests, Xmas and New Year, and the Six Nations. I haven’t checked it for a couple of weeks, but it’s a very deceptively-shaped object. Just when you think it’s full, you crack it open and find that it’s good for at least another month.
Thi Nga was right about the Pagoda’s box being full to the brim, though. I took it home and counted it last night. It contained a very impressive £60.00, and some odd shrapnel which I fed back in, simply to save messing about with small amounts. (I’ve also added one Swiss Franc, 25 Canadian cents and one US cent to my growing collection of coins from around the world.)
When I picked it up, Thi Nga and Tania told me that there was a tenner inside. They’ve decided to make a regular donation to the cause. There’s a 5p charge on plastic bags in Wales, and the money raised goes to a charity of the business’s choice. They’ve chosen to support the Anthony Nolan Trust. They didn’t tell me that there was a £20 note in the box as well. It took me a few minutes to extricate it, as it was wedged at the bottom. I’ve just paid £60.00 into the bank, and in the next couple of weeks the Pagoda should get a certificate thanking them for their support.
I’m playing with the idea of a sponsored walk/pub crawl from Pontypridd to Aberdare some time this summer. Once all the students are free, I’ll try and sort out a date that suits everyone. In the meantime, the collection boxes are ticking over nicely.
It’s surprising how bits of loose change can mount up. If you come across one of our distinctive black and green tubs on your travels, please feel free to relieve yourself of some fiddly coppers and help a very worthy cause at the same time.