In which The Author serves up some university leftovers

I don’t remember my dreams in sufficient detail to keep a proper dream diary. A couple of years ago, as you might remember, my friend Josie was doing her PhD on the psychology and neuroendocrinology of dream states. Because of my chronic insomnia and fragmentary recall, I had to decline her invitation to join the study. (On the other hand, maybe some time in a sleep lab would allow the researchers to figure out why I can get by on barely four hours’ kip every night.)
Anyway, the change of season seems to have ushered in a fresh wave of interesting – if fleeting – night-time adventures. With this in mind, I’ve decided to do what Carys and I talked about six years ago, and keep a notebook and pen on the bedside table. Even if I don’t come up with anything which Josie would have found useful, I can at least jot some notes down on first waking.
I always used to carry a small notebook with me, and I’d jot down ideas for song titles, outlines for stories, pithy observations about friends and strangers, bits of overheard conversations, and so on. This raw material gave rise to my early blog entries on MySpace, some of which are preserved in the Archives. I’ve got a number of these little red books, but I haven’t looked at them for ages.
When I went back to university in 2009, I started carrying a notebook again. I was doing a Creative Writing module, and I quickly got back into the habit of recording useful snippets for future reference. Some of them developed into decent ideas (that was how ‘Pit Stop’, my Doctor Who/Torchwood fanfic story, came about). Others fell by the wayside when I was forced to abandon my studies.
On Sunday evening I dug out one of my old notebooks and took it upstairs with me. There were a couple of blank pages which would do for recording any bizarre or interesting dreams I had that night.
I found that it contained several rambling pages of notes for an essay I was writing about Peter Ackroyd’s novel Dan Leno and the Limehouse Golem (my second-year assignment). I’d obviously been working on in the pub, and I’d made a couple of attempts to put my ideas on paper as they occurred to me. I’d already been to London to see the area for myself (see Limehouse Blues and Twos), so I can only assume I was writing soon after my expedition.
I read my notes again, and I’d forgotten just how much work I’d put into this piece. There’s even a separate ‘mental map’ of connections between the various elements of the story and my own observations, which I drew to help and tie everything together, headed by the words How the fuck do I structure all this? Considering that we were supposed to submit our drafts as well as the finished piece, I was either on course for a decent mark or a psych assessment. You can decide for yourselves.
I know there’s no structure to it; I know I’ve repeated some parts; I’m well aware that I’ve drifted into a more personal reflection towards the end of the draft. It’s just a rough outline, not a finished assignment. It doesn’t even make sense to me any more; I was just putting ideas down as they came to me.
Where there’s a gap between paragraphs, that reflects my original writing style. As each new avenue became apparent, I separated them out, with the intention of putting them in order later on. I’ve inserted extra material in [brackets], indicating things which might need explaining from an outsider’s point of view.
Where I needed to check things later on, I made a marginal note to myself. I’ve set these marginalia in bold, so you can see where my train of thought stopped at the amber lights here and there. (You’ll also see the exact point where it was derailed entirely, and took a long time to get going again.)
It’s unlikely that I’ll ever get round to finishing this off properly, and even less likely that I’ll have a chance to submit it for assessment. But I thought I’d post it in case I lose my notebook, as I still think it’s worth preserving. (Well, I would think that, wouldn’t I?)

Fiction, History and Psychogeography in Peter Ackroyd’s Dan Leno and the Limehouse Golem 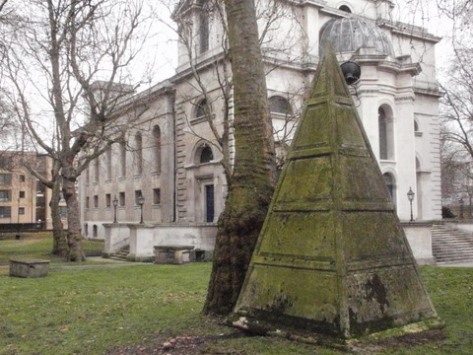 Psychogeography. Derek Beackon [a former BNP councillor in Tower Hamlets] (Hugill’s article). Far-fetched but relevant. East End.
(Josef Fritzl’s house is also scheduled for demolition, 22/1)
If evil manifests itself in a particular space and/or a particular body, does society seek to eradicate it by physical extermination? Without a physical body to which ‘evil’ can be attributed, do the buildings remain as a conduit to the underworld?
[This is the point where I completely changed mental gears and started addressing my tutor directly.]
What was intended as a critical essay on Peter Ackroyd’s novel has become something darker and more introspective. It’s your fault. You told us we could use the authorial ‘I’ to reflect on our own creative processes.
Please see the preceding pages. They were written under the influence of various painkillers and pints in between buses to and from the surgery. I didn’t have the source books to hand, so I’ve had to vamp it for the most part.
Psychogeography. I’ve got the original Guy Debord definition at home. It’s to do with the way your surroundings affect your psychological condition. I’ve enclosed a photocopy of part of my Great Unpublishable Novel so you can see where I’m coming from.
Fiction. That’s what we’re supposed to be studying this year. I’ve only done one full-blown completed work of fiction ever – ’47 Minutes’ – and I worked long and hard over that. I downloaded computer software and consulted textbooks and journals to make sure my historical info was spot-on. Not many novels come complete with a Reference List.
Peter Ackroyd’s novels probably should. Who else would have the audacity to weave a Victorian murder mystery around the Ratcliffe Highway murders of December 1811, while Karl Marx, George Gissing and Dan Leno float freely through the slums, doss-houses, taverns and chop-houses of London? Using Thomas De Quincey’s satirical masterpiece ‘On Murder’ as a springboard, Ackroyd’s psychopath fills the vacuum between John Williams (convicted, executed – some doubt remaining over his guilt!) and John Christie (convicted, executed).
The problem is that London always wants its sacrificial victims. Between Ratcliffe Highway (1811) and Whitechapel (1888) there is nothing to satisfy the blood-lust of the teeming mass at the heart of Empire – the voracious deity for whom everyone is a potential victim. Ackroyd’s fictional murders fill the gap. No more. It’s a bone in the gaping maw of the city of Man.
A month ago, the body of landscape architect Jo Yeates was discovered by walkers near her home in Bristol. My brother railed at the TV coverage today: ‘Why is she always a landscape architect?’
A professional person has contacts. Her parents are no doubt well-connected, wealthy, respectable. If the body found in a snow-filled ditch had been that of a prostitute or a junkie, she’d have merited a couple of paras in the local paper and then been shoved aside in favour of the next cat up a tree or smiling golden anniversary couple.
And that’s the nature of the media. Peter Ackroyd’s fabricated news reports are so authentic that I feel tempted to seek them out in the archives of the British Library. But it’s the psychogeography – the spirit of place – that permeates his novel. The fact that Karl Marx and George Gissing and John Cree (who may or not be the killer) cross paths regularly without even knowing it is irrelevant. The fact that they meet under the great dome of the British Library is the key. The pyramid in the grounds of St Ann’s Church, Limehouse, (a most odd monument to find in a Christian churchyard); the non-existent pagan idol of Babbage’s Analytical Engine (never constructed according to Hofstadter); the avenues and alleyways of Limehouse – these are the focal points which Ackroyd’s characters orbit. The city itself, in its two-thousand-year evolution, exerts its malevolent influence over the hearts and minds of its inhabitants, with hideous results.
And that’s where it ends, abruptly, with no resolution. I think I made some progress towards typing up my notes, but it made no difference. My long-standing back injury took its toll about a week later, and my university career reached an even more abrupt end than this notebook entry does. I don’t know how the hell I was going to try and make sense of the whole thing, but I was definitely making progress.
There’s an intriguing postscript, though.
At this stage I hadn’t encountered Ben Aaronovitch’s books. Therefore, I had no idea that his first Peter Grant novel Rivers of London would explore vaguely similar ground. The spirit of riot and rebellion rises up in London and possesses unfortunate passers-by, who then commit awful crimes which they can’t remember.
While I was in London doing my own psychogeographical investigation of Limehouse, I realised that the spirit of riot and rebellion is still alive and well; that the city still needs its human sacrifices. Look at this newspaper placard I found on the day, barely an empty wine bottle’s throw from the dossers’ shelter behind St Ann’s Church.

The greedy ghosts of London, it seems, are always with us.
Advertisement