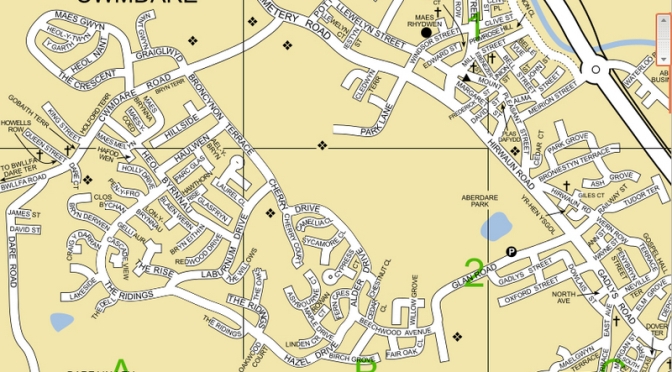 In which The Author goes off-piste

Earlier this week, faced with cloudless blue skies and frost-covered pavements, I decided to head into the unknown realm which I described last time with the words Here be Dragons.
Cwmdare sits in a side valley running roughly east-west, surrounded by dramatic and beautiful hillsides. It starts at Broncynon Terrace, on the hillside above Aberdare College. The main road climbs steeply to the ‘square’, and then levels out before petering out at the entrance to the Dare Valley Country Park. It’s a fairly compact village with a primary school, a single shop/post office and a pub clustered around the square. There’s an active chapel opposite the school, a disused chapel on Bwllfa Road, a ‘Free Mission’ halfway up the hill, and a small Anglican church in Queen Street. More or less opposite the mission hall are a recreation ground and a children’s playground, adjacent to the miners’ welfare club. All vestiges of the industry which brought Cwmdare into being are, unsurprisingly, long gone.
This comparatively small community grew up in stages, and can be divided (more or less) into four parts.
Old Cwmdare is the area centred on the square; the main road is lined with houses, and there are a few terraces branching off to either side. This is where the majority of the original housing stock can be found. The houses break off abruptly near the bus turning circle at the entrance to the country park.
The road runs on to the tiny hamlet of Bwllfa Dare, where several coal mines once blighted the landscape. A steep terrace of neat cottages, a couple of detached houses, and a rambling farm mark the limits of human habitation. Beyond this point there is nothing but wilderness and wind turbines, as I noted in ‘Up Around the Bend‘.
New Cwmdare consists of Maesgwyn and the neighbouring streets, and the smaller estate more or less opposite. Maesgwyn is a large postwar council estate built on a former farm of the same name, on the northern side of the main road. The rest of the council housing (to judge from my limited knowledge of the area) is a more modern mixture of flats and maisonettes.
That leaves New New Cwmdare. And that’s where the fun starts.