In which The Author is glad he went out last week

The last seven days have kept becoming weirder.
I’ve introduced a number of friends to a creative little network in Aberdare. I’ve got in touch with the author of my forthcoming copy-editing project – and his wife is now following me on Twitter. I’ve helped Geoff E. to polish off an essay he’s been working on for ages. I’ve drunk an awful lot of beer, eaten quite a lot, and made plans to catch up with more people over the next few weeks.
I was even exempt from the usual cretinous drugged-up Valleys lowlife that usually comes out on a Thursday. Goddess was clearly feeling kindly disposed towards me last week.
Yesterday I logged into my emails and found one from a company named SRO. I’m on their mailing list purely because they were involved with my audition for the revived TV quiz show Fifteen to One a year or so ago (see ‘The Game’s Afoot‘).
Oddly enough, I’ve been unsubscribing from mailing lists recently, because I’m getting more junk mail online than I do through my front door. The only reason SRO got through is because I haven’t got around to doing them yet.
As things turned out, that was probably just as well.
The email was an invitation from an independent TV company, inviting people to apply to be contestants on a BBC4 quiz show called Hive Minds. It said something like ‘Do you answer the questions on Only Connect and University Challenge? Do you like crosswords and word games?’ Two out of two ain’t bad. I’d never heard of the show – in fact, I thought maybe it was something still in production – but it was probably worth thirty seconds of my time. I filled in my details and submitted them online.
Only about an hour later my phone rang. It came as a bit of a relief, really. I spent ages last week potching with the bloody thing, trying to set up a ringtone. At least now I know it works. (So does everyone else who was in Aberdare Library at the time, but it’s early days yet. I’ll probably find the volume control in another week or so.) It was a London number. For a moment I thought it might have been my contact at Orion Books. Then I wondered whether it was a previously unknown proofreading client, wanting to take advantage of my services. I answered it when I was halfway down the stairs, just to be on the safe side.
The caller turned out to be Bethan, a production assistant on Hive Minds. We chatted for a while before she asked me about a dozen general knowledge questions.
‘I’ll warn you now,’ Bethan said at the outset, ‘they are quite hard.’
‘They can’t be as weird as the questions on Round Britain Quiz,’ I replied, and Bethan laughed. That sounded ominous to begin with (see ‘A Clash of Cultures‘).
Well, I kicked the first one straight between the posts without even having to think about it. It was a question on books, after all. Not just that, but one of the most renowned and influential books of the last two centuries.
That was pretty much the story for the rest of the phone audition. I made a couple of educated guesses, and I know I definitely got one wrong, but Bethan was pretty impressed by my performance. She’d said that, even if I got the answers wrong, an educated guess was better than nothing. (I checked a couple of my hunches later on, and they were right. The job’s a good ‘un.)
Bethan asked me if I knew anyone else who might be interested in taking part. I mentioned a couple of likely suspects, and she asked me to pass her number on to them. The game involves teams of three, so if three friends want to enter together, all the better. She more or less told me on the phone that I’d be invited to the actual audition in Cardiff, and to wait for an email.
Less than an hour later that email arrived. I’ve got to go to Cardiff a fortnight today, to meet some more people involved in the show.
I downloaded a couple of editions to watch last night, and then sent some texts and emails. To judge from the underwhelming response, I’ll be in Cardiff on my own. One of the guys I thought of suffers from quite severe dyslexia, so the game wouldn’t play to his strengths anyway. The other just bottled out immediately, as I’d feared he would. That leaves one more person whom I’m hoping will bite the bullet and make the call.
There’s no guarantee I’ll qualify for the show, of course, but I needed an excuse to go to Cardiff before Xmas. Hive Minds – a show I didn’t even know existed thirty-six hours ago – has just given me that excuse.
See – that’s what can happen when you go out in Aberdare on a Thursday afternoon for just the one. Bizarre, or what?
Advertisement 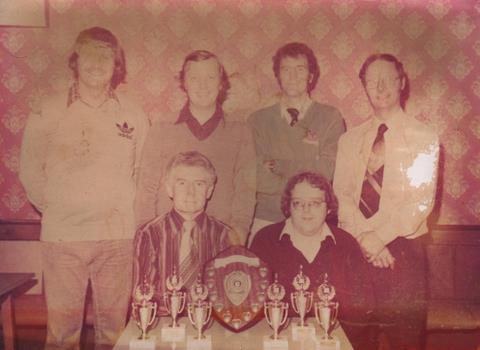 In which The Author takes a starter for ten

Even though we were only in it for the fun (and the odd trophy), there was money to be made on occasion.
My friend Andrew L. and I were playing the Monopoly quiz machine in the Cambrian one Saturday evening. We’d dropped a few small prizes, and it became apparent that the machine was about to pay out. We threw another pound in and decided to play it right to the wire. We couldn’t believe it when both Park Lane and Mayfair lit up. We’d dropped the jackpot – twenty quid. I don’t think it had been done before.
Andrew looked at me with a huge smile on his face.
‘We’re playing the ‘double game’, remember?’
That meant that we’d doubled our stake, but also doubled our prize fund. If you’ve never heard forty shiny pound coins crashing into the payout tray – believe me, it’s a beautiful sound. We changed our winnings at the bar, and without any physical effort we managed to fund our entire night out. It can be done!
My last foray into the CVQL came when Kelvin and Mark persuaded me to join the Marquis team. The Marquis is a big pub/restaurant on the outskirts of Aberdare, and it was pretty much the operational headquarters of the league.
I’ve never been keen on the place. In fact, I’ve only set foot in there twice: the first time was when Gaz and I officially registered the Whitcombe team; the second time was one Sunday night when I had to pick up the questions. After some arguments I accepted Kelvin and Mark’s invitation, but on the strict proviso that I was only available for away matches. It was the 2002–3 season, and we won the Knockout Cup.
That was the last addition to the trophy shelf at home. I’d started to lose interest, and the league had begun to decline too.
The wave of pub closures which broke upon the Valleys meant that we lost a substantial number of venues in a fairly short time: the Morning Star, Cap Coch, Melbourne Star, Ivy Bush, Bird in Hand, Corner House, Mount Pleasant (Cwmaman), Hirwaun RFC and the Bodwigiad (among others) have all vanished from the Valleys Virtual Pub Crawl.
In the name of progress, other pubs were being converted into one large room. That’s all very well for a fun quiz, like the Cambrian Wednesday Wingdings, but it’s useless if you’re trying to have a serious competition.
As the traditional bar/lounge layout disappeared, the Cynon Valley Quiz League started to dissolve. There were other factors at play, too. Older people stopped coming out, restricted by the lack of public transport. Younger people drifted away as they started families. It was difficult to attract new teams. Slowly but surely the quizzes were replaced by all-day football on TV and live music or karaoke in the evenings.
The CVQL dwindled to one division, then to half a dozen teams, and died altogether a few years ago. You’d be hard-pressed to find a decent pub quiz these days. Apparently there’s one in Thereisnospoon every so often, but I’ve never sampled it.
Remarkably (considering that it started as a one-off), the Wednesday night quiz in the Cambrian is still a fixture of the Aberdare social calendar. I called in there a fortnight ago, but it wasn’t the same. I don’t think I’ll bother again.
In spite of people’s best efforts, I doubt if we’ll ever return to the heyday of the eighties and nineties. With so many pubs having wifi nowadays, it hardly seems worth even setting a quiz. All that an unscrupulous player needs to do is to ‘go for a smoke’, log onto the Cloud on his/her mobile phone, and search out every missing answer. It’s totally against the spirit of the early trivia contests, which relied on one’s ability to recall a truly broad range of general knowledge.
I salute the good men and women of the Cynon Valley Quiz League, whose vast store of facts (and tremendous recall) sustained the tournament for two decades and then some. I raise my hat to Alan Everett, who somehow managed to generate nearly ninety questions, covering all imaginable topics, every week for six months of the year, year in and year out – as well as the questions for the individual play-offs.
I raise a glass to the memory of Paul David, Colin Jones, Alan Swanson, Norman the newsagent from Hirwaun, and too many other mainstays of the league who died too young.
Finally I’d like to thank Dad himself, who first got me involved with the bizarre hobby which has sustained my interest (on and off) for three decades.
With that breadth of general knowledge and wealth of experience, I bet there’s one barnstorming team playing in the Undying Lands Quiz League this weekend.
BERKMANN, M. (2000) Brain Men: The insider’s guide to quizzing. London: Abacus.