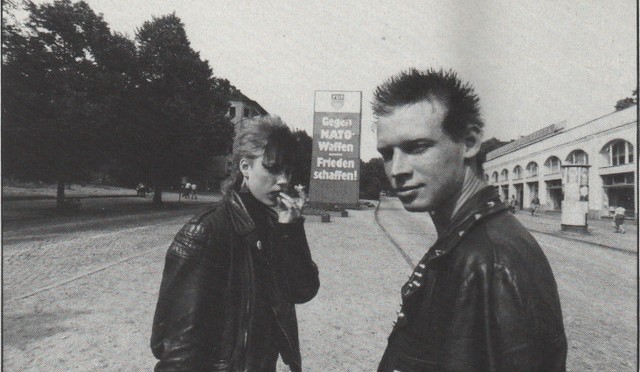 In which The Author uses his time machine again

Since it’s such an interesting historical artefact, I thought I’d transcribe the whole ZigZag article (with a little judicious proofreading here and there) and share it with you.

LOOKING OVER THE WALL

‘What does it mean?’ demanded the cop, staring hard at the punk’s ‘No Fun’ badge.
‘Means there’s nothing to laugh about … just like him,’ mocked the second policeman. 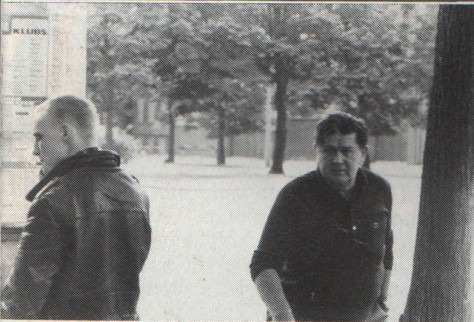 Tom is tall and gangly. His hair is cut to the bone with a tail of dyed blond hair down the nape of his neck. In his left ear, which he pierced himself, he sports four tiny earrings. His pride and joy is an old motorbike jacket, swapped for his grandfather’s military uniform.
As he stands there between the two policemen, the raucous strains of the Au Pairs come swirling over on the wind. The group are playing the huge circus tent of the Tempodrom. It’s a five minute walk away. It might as well be over the rainbow.
The demarcation between right and wrong is often small. Here it is 100 yards. The arbitrary line followed by the military planner’s pen 37 years ago has forced Tom and thousands like him to walk close to the edge.
Visitors from London or Paris, grown blasé to most street excesses, do a double take when they see Punks on these streets. For this is East Berlin.

Stray off the straight and narrow of the tourist traps, the goose-stepping guards at the tomb of the unknown soldier on prestigious Unden den Linden, the massive concrete tanks of the war monument at Treptow, and you enter a different world.
Alexanderplatz, the modern showpiece city centre development, stops abruptly as you go under the main railway station. Concrete and bronzed glass give way to the war-damaged slums of Prenzlauer Berg, unchanged since the Thirties.
This is the city’s punk territory.

Tom is living in a squat with five friends. The furniture looks as if it has been thrown out of a Liverpool doss house. Graffiti covers the walls.
Fast asleep in a corner is Gerd, his spiky green hair wilting slightly. He has been held overnight by the police. His T-shirt and peace buttons were confiscated. His trousers, formerly covered in ‘Anarchy’ and ‘UK Subs’ slogans, have received a quick paint job courtesy of the state.
There have been a few punks in East Berlin since soon after the Sex Pistols hit the headlines in England in England in 1977. The difference now is that the clandestine quirk of a few has blossomed into a full-blown craze. Teenagers as young as 14 are involved in the movement and I heard reports of an increase in truancy from schools. The punks of East Berlin have come out. Much to the astonishment of neighbours and displeasure of the authorities, they are no longer afraid to be seen on the streets.
The punks are a phenomenon which neither the police nor the SED (the ruling Communist party) really know how to deal with. Harassment is the most favoured method.
Alexanderplatz, indeed most of the city centre, is a no-go area. Any who stray here face instant arrest. Things are marginally better in Prenzlauer, but still most shops and cafés offer only closed doors. The punks’ music is still effectively forced underground, to the cellars of the old tenements and church crypts.
Gerd’s experience with the police is commonplace. It is nothing special when someone is taken into custody for a time. Most punks are, of necessity, quick-change artists and with the aid of a trusty toothbrush and home-made dye can restore their hair to something approaching normality. 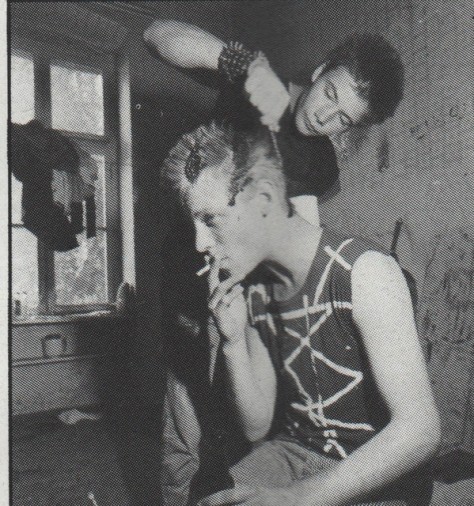 But seen now, Gerd wouldn’t attract a second look in West Berlin’s freaky SO 36. The music club, frequented by David Bowie in the mid-Seventies, holds a childish fascination for him. ‘What’s the place really like?’ Gerd kept wanting to know.
As the evening drew on, Tom’s squat settled down to celebrate the return of the newest member, Will, from prison. Hard-to-get canned beer, a punk status symbol, had to be obtained from a foreign currency Inter shop near Checkpoint Charlie.
Will was caught spraying a slogan on the Berlin Wall: ’20 Jahre Mauer, wir werden langsam sauer’ – less poetically in English: ’20 years of the Wall, we are slowly getting sick of it.’
Will is 19 now. He was held for four months in custody for the offending wall painting. Subsequently he was put on probation for 14 months.
He stayed silent for most of the evening with Nadja, the only girl in the squat, dominating the conversation. She has only been before the authorities once. That was last year, after she had applied for a travel permit to England. Her parents, who are party members, have disassociated themselves from her.
Many of the city’s punks come from good homes, many from academic families. Tom’s parents are well-known doctors.
Spiked hair and a tramp’s wardrobe test family bonds to the limit and it’s especially hard when parents are SED members. What often serves to keep the young in the family home against all the odds is Berlin’s acute housing shortage. Flats are extremely difficult to find, hence the inner city squats – another eye-opener for Western visitors.
Apart from these squats, East Berlin also mirrors its Western twin in exerting a powerful pull on the Bohemian element in the rest of the country. The city is a mine of information on the current international scene. One thing can leap-frog the Wall unhindered is news. All of West Germany’s broadcasting output can be picked up. So too can the American (AFN) and British forces (BFBS) radio and TV stations.
The authorities may be striving to enforce a cultural straitjacket, but East Berlin has a selection of Western television greater than that available in Britain.
With so much information at their disposal, people can afford to be discriminating. When it comes to the punks it means that they are choosy in their musical tastes. They much prefer the Dead Kennedys or UK Subs to the imitative ‘Deutsche Neue Welle’ – German New Wave – sweeping the city’s Western sector.
The West German television Rocknight spectaculars broadcast live by ZDF throughout the Summer were one big bore for them. Much more to their liking is John Peel’s late night programme, which they pick up on BFBS radio.
When it comes to fashion, Levis are no longer highly prized rarities. Much more punk kudos attaches to hard-to-come-by Adidas training shoes. When I first went to East Berlin I couldn’t understand why people kept looking at my feet … it turned out to be nothing more fascinating than those three stripes on my running shoes. Indeed any streetwise East Berliner most easily identifies a Westerner by his footwear – a useful facility if you’re trying to get foreign currency on the black market.
The churches play an important practical role in the lives of the punks. Church halls provide virtually the only forum for bands to appear in a sort of semi-public capacity. News of any gigs spreads quickly through the grapevine.
In the cellar of one of the Prenzlauer Berg tenements Tom’s punk band have a secret practice room. It’s sparsely furnished with two speakers (home made) and a microphone. ‘Equipment is unbelievably expensive and hard to get,’ said Tom. ‘If you are in the know and have the ready cash you can grab the stuff when it appears on the black market. Otherwise you just grow old waiting,’ he explained.

Ironically many families in East Germany do have substantial savings. 60,000 Marks (about £15,000 at the official rate of exchange) was one figure quoted me as being quite common. That is really not so surprising. The country has a Gross National Product which, per capita, is higher than Britain’s. But when it comes to consumer durables there is very little to spend one’s earnings on.
Barred from performing publicly, Berlin’s punk bands get hardly any money from their appearances. The so-called state grading committee, who play a vital role in the politics of culture, choose which groups will get state blessings and which are destined to a lifetime of playing private parties. For the punks it’s all a foregone conclusion.
Prospects of actually producing a record are nil. I heard of only two recording studios, one concentrating on classical music, the other on the country’s legitimate pop music. Groups such as the politically innocuous soft rock ‘Karat’ – a sort of cross between Jean Michel Jarre and the Moody Blues – get state backing and full red carpet treatment, including tours to the West. Without such state blessing there is not only no recording contract, but also no gigs, no proper practice room and, most important, no decent instruments.
The Amiga pop recording label issues at most two new releases a month. It’s a record censor’s dream. Back in Alexanderplatz the friendly salesgirl at the record shop proudly showed me the rock section. I counted no more than ten different albums, including the latest import from Italy by Macchina Maccarone.
To be different is to be a direct threat to the state. For the musical and the sartorial dissident it’s a hard life. But then the most amazing thing, really, is that they exist at all.
Advertisement